In case you missed it, Union Hall finally opened up its doors last week. I was skeptical going in but very hopeful that I could potentially find here my new favorite spot.

Spoiler alert: it did not disappoint.

The vibe is super chill and all their menu is based on small plates. I didn’t know this going in, but it’s the same owners as Brass Rail and Stewed Cow. The chef was also in Chopped and well, to me that’s pretty cool. Staff was super nice and you can tell they are excited to work there, which is always a plus.

Or wait, let’s talk drinks for a second. They have $5 martinis on Wednesdays! Their dirty martini is actually pretty darn good. I would have liked to have some blue cheese inside my olives but that’s ok, I’ll let it pass. They have great specials every day of the week including $2 Union Brew mugs every. single. day.

Ok, now for food, for real.

They may look like hush puppies, but these are actually french onion soup mac and cheese balls! They even come with their own little broth on the side, delicious. Tip: don’t be afraid to embrace the broth! (Did I say these were great?)

They had three sliders that you could order individually, but we decided to go all out and try the 3 of them out: veggie, turkey burger, and lobster. Brian and I both agreed the veggie slider was the best because the sauce was so good.

I don’t know about you, but I’ve seen plenty of pins on Pinterest and videos on Facebook about the wonder that is cauliflower fried rice. I’ve been meaning to cook it at home but I’m always too lazy. Union Hall is the first restaurant I’ve been to that offers cauliflower fried rice as part of their menu. It was probably the best part of the meal. Plus, it comes in this cute little take-out style box so, totally recommend it. 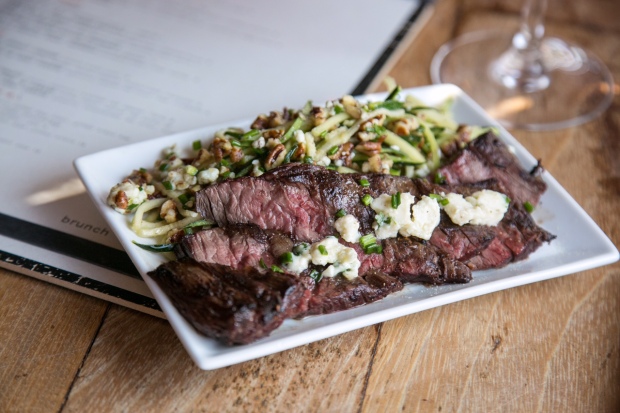 That may look like a tall shot of something creamy but it’s actually a mini milkshake! The waiter explained how they have different special milkshakes every day and the day we went in it was fruit loops. I must admit I was waiting for a mini version of those Black Tap shakes that can give you diabetes so I was a little disappointed when it didn’t have an actual fruit loop in it, but boy oh boy, it was SO good. It tasted like those last drops of milk from the fruit loop bowl.

First, they have $2 mimosas! Can’t tell you how they were because I didn’t have one (stupid, I know) but I will be back and can update based on the verdict. Again, $2 mimosas!

Breakfast tacos for the win. Get them with bacon, it was actually quite perfectly crisped. I can get picky about bacon and there’s nothing worse than a soft piece of bacon. (That’s what she said? No? Ok, sorry.) Their avocado toast was ok, but not something to die for. (You should never die for an avocado toast, anyways.) It’s a nice side to share but by no means it should be one of your main plates.

Their skillets were actually really good. If I hadn’t been so full with the breakfast taco I would have killed them all but thank goodness I brought Brian along. We had one inspired by eggs Benedict and the other one had goat cheese and some other great stuff.

There’s still so much I want to try over at Union Hall so stay tuned on my Instagram for future posts. I’m determined to try everything on their menu so let’s see how it goes.

P.S. Their coffee was pretty good too!